Thursday 30th April 2015
We arrived in Studland late afternoon after a fairly uneventful drive down, complete with terrier Alfie, and Terry's new sculling boat on the roof rack.  The plan was for Terry to meet with the local engineers who are helping him to produce new frames for sculling boats, and for Terry to give the boat a good testing by rowing round Poole Harbour.

We stayed at the Bankes Arms.  The room was small but comfortable, and the bar had a lovely open fire, good beer and a reasonable selection of home cooked food.  I had printed off several walks from the National Trust web site and once we had settled in we set off on the Old Harry Rocks walk.

Old Harry
This is a nice easy walk along the top of the cliffs to the point at Old Harry.  Some nice woodland plants were flowering among the trees.  As it was getting late we turned back rather than completing the circular walk, but not before catching some good views of a group of porpoises out to sea.  Judging by the accompanying gulls they had found fish.


Friday 1st May
Terry had a meeting with his engineer, so I set off after breakfast with Alfie on a 3 mile walk over Godlingston Heath to the Agglestone.  I was hoping to see Dartford warblers but the weather was not ideal for small birds, overcast and windy, and I was unsuccessful.  It was still a great walk with fine views over the heath to Studland Bay and Little Sea.


Poole Harbour
After lunch it was time to test the boat in Poole Harbour.  Shell Bay Marine were kind enough to let us use their jetty, and Terry set off to see what it could do.  He ended up rowing completely round Brownsea Island, in some pretty rough water, and was very pleased with how it went.

Alfie and I had a wander along the shore, passing a collection of houseboats and then found a comfortable spot out of the wind to have a rest after the morning's exertions.  Birdlife was fairly limited, gulls and oystercatchers mostly, but I did see a couple of Sandwich terns, my first this year.


Saturday 2nd May
After another good breakfast and loading up the car with all our gear, we wanted to have another try at seeing Dartford warblers and to have a look at the Little Sea.  I didn't expect to see too much on the lake which is said to be very good for wildfowl in the winter.  We followed another NT circular walk which included 3 hides, one overlooking the Little Sea and two by Poole Harbour.

Again the weather was overcast and windy, and small birds were conspicuous by their absence.  We did see a male stonechat and a wheatear, other birds included linnets and meadow pipits and a confiding little grebe on the lake.

By the time we had completed the walk it was time to head for the ferry across the harbour and back to Suffolk for tea-time.

Posted by Marilyn Abdulla at 07:23 No comments:

I started the day intending to visit Minsmere, but after a quick look from the East hide and a very nice macaroni cheese in the café, I decided to have a look at North Warren, an RSPB reserve near Aldeburgh.

I ended up doing the circuit known as the Reedbed Loop, walking in from the Leiston road through a very nice area of heath and grassland.  At the seat which overlooks the reedbed I was surprised to see a Harris Hawk which flew past quite low, calling and then disappeared over the far side of the reedbed.  I understand that an escaped bird has been in the area for some time.


﻿﻿
Cutting through the woods and turning left when I reached the old railway line I soon reached another viewpoint over the reeds where 3 Hobbies were putting on a fine display, and a Marsh Harrier was seen in the distance.  If I had continued on this path I could have visited Thorpeness Mere - the House in the Clouds was visible over the wet meadows on the right of the path. 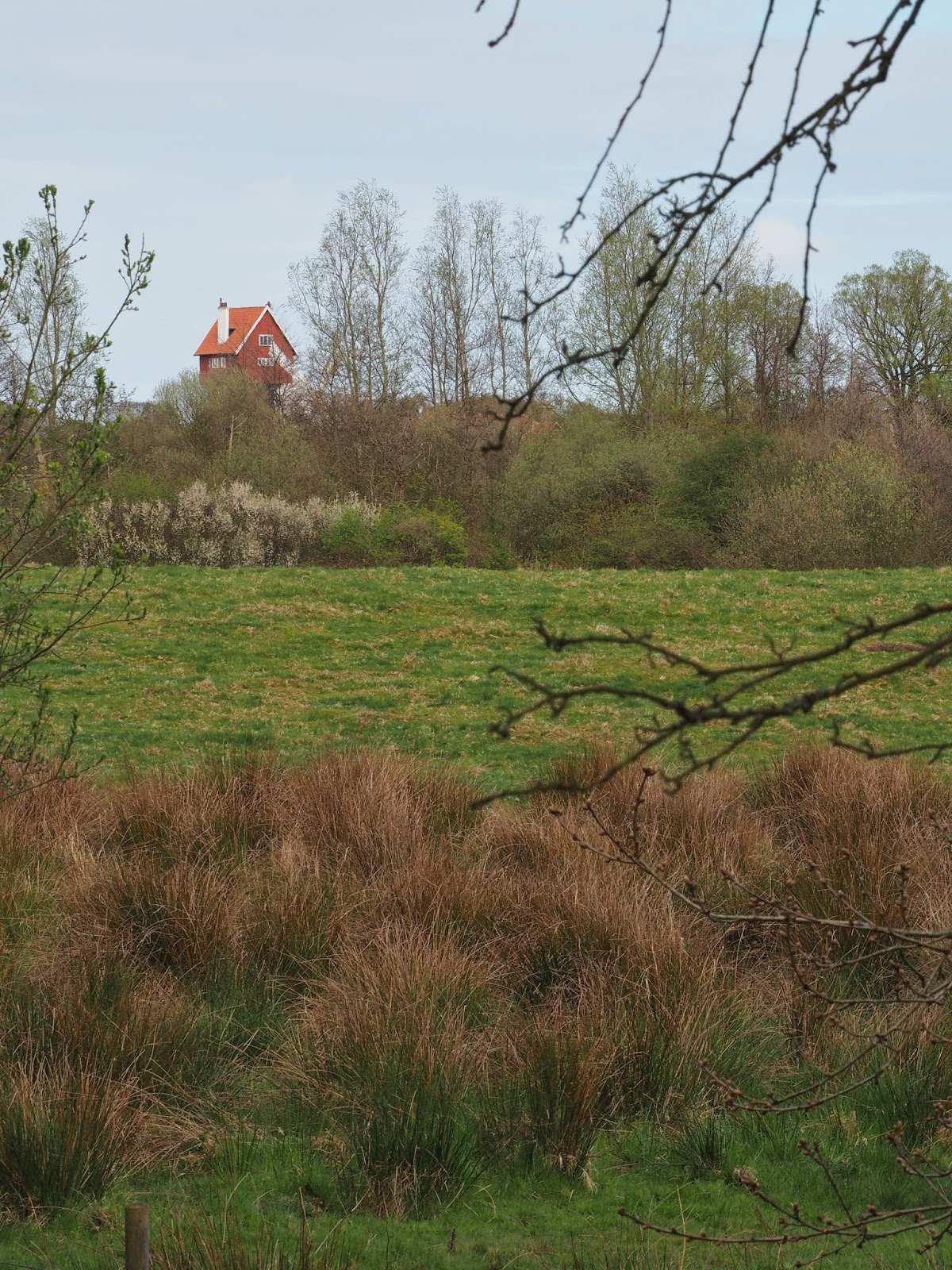 I continued to follow the path around the reedbed,  through some woodland, and past some cottages, ending up on a boardwalk leading to a very nice new viewing platform.  A pair of Marsh Harriers were displaying here, and the Harris Hawk put in another brief appearance.


﻿﻿﻿﻿
The boardwalk continued through some areas of cut vegetation which looked very promising for later in the year.  I saw a few clumps of Marsh Marigold in flower, a bit of a rarity nowadays.

All in all a very interesting walk, one I intend to repeat soon.
Posted by Marilyn Abdulla at 11:29 No comments: