The organic garden at The EcoTech Centre in Swaffham is looking amazing at the moment.  Absolutely full of colour and growth.  I was there with other members of the voluntary Garden Group to help out with some gardening.

While I was there I took 15 minutes to do a butterfly survey:
1 large white
4 gatekeeper
5 peacock
2 red admiral

I had previously seen a skipper, but didn't see it during the timed count.  I am not sure which species it was either.  Lots of bees and hoverflies too.

http://www.ecotech.org.uk/
Posted by Marilyn Abdulla at 13:01 No comments:

At last - a sunny morning AND time to stop and look!
I spent 15 minutes yesterday morning counting butterflies in T's garden.  It was a bit breezy so the best spot was the big Hebe bush beside the drive which was buzzing with all sorts of insects - bees, wasps, beetles, flies etc etc.
Final total:
3 gatekeepers - all male - chasing each other around
1 comma
1 large white - there may have been 2 as seen twice, passing through the garden at a rate of knots
1 small white
I hope to do another count nearer to home next weekend.
Photos to be added
Posted by Marilyn Abdulla at 06:10 No comments:

My partner T had been looking forward to taking me for a few days sailing on the east coast for some time.  So eventually I managed to book a few days holiday and with a fair forecast and favourable winds we set off from Felixstowe Ferry on Tuesday lunchtime.
First stop was Walton backwaters, a maze of channels and salt-marsh to the north of Walton-on-the-naze.  We anchored in the channel near Stone Point, at high water.  This is a bird reserve with a shingle beach where there appears to be a good tern colony.  There were lots of Common Terns flying to and fro, but also numbers of Little Terns and a small group of Sandwich Terns, making a lot of fuss.  We didn't land, as I suspect it is discouraged, although not everyone realised this.
As the tide was receding fast we moved round into Hamford Water which is much wider, and anchored there for the night.  I was very pleased to see a broad expanse of mud flats appearing with plenty of bird life for me to train my telescope on.  I have recently bought myself a digiscoping adapter and had fun trying it out. However the light was fading fast and the movement of the boat didn't help, but it was good practice!
There were lots of Oystercatchers, Black-tailed Godwits - some still in red summer plumage, Avocets, Curlews, Redshanks, a few Bar-tailed Godwits and a single Greenshank.  I was confused for a while by a large black and white diving duck which turned out to be a male eider in eclipse, one of a group of 3.  Lots of Canada and Greylag geese, and 5 summering Brents.  It was lovely to see a flotilla of 19 young Shelducks in the charge of 2 adults swimming down the river and clambering out onto the mud.  It seems to be a good area for Little Terns which were fishing very close to the boat.  Herring Gulls must have cast iron stomachs - one was finding small crabs in the mud, hauling them out by their claws and swallowing them whole!  A few Common Seals were hauled out on the mud and seen swimming around the boats, apparently it is a renowned spot for them and they can be a nuisance by hauling themselves into peoples' dinghys and causing them to capsize.
The wind dropped away at dusk leaving a very calm evening and a beautiful sunset.  We sat on deck until it was almost dark when it started to turn rather chilly. 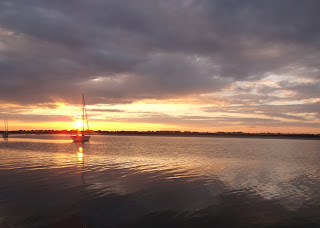 On Wednesday morning we headed off back up the coast to Southwold, taking most of the day to get there against the tide and with a rather fickle wind.  I enjoyed watching the coast glide past and took lots of photos.  Two or three small parties of Curlew were flying south, migration in progress.  The only really good bird of the trip - a skua - put in a brief appearance at the very moment when I was engaged in hauling on a rope and couldn't get to the bins!  I presume it was an Artic - a pale morph - it showed a distinct pale collar and underparts, but I couldn't be sure.  Passing Sizewell power stations the cooling towers were well populated with Kittiwakes which also came near as they were flying in and out.
Lots of Swifts were flying low over the streets in Southwold during the evening and a family party of Reed Warblers showed well beside the dyke across The Common (the road to the harbour).
On Thursday we stayed moored in Southwold and did a circular walk to Walberswick, along the beach, across the marsh and back via the heath.  There was large colony of Little Terns on the shingle beach, roped off against walkers and dogs, but not proof against weasels.  The presence of a weasel was revealed by the agitated terns, Ringed Plovers and Redshanks, presumably all nesting nearby.  I saw it leap up in defiance at an attacking tern, but didn't see if it carried off any prey.  We had a good view of a Bittern flying across near Dingle Great Hill, and also of a pair of Marsh Harriers passing food to the female which then landed in the reeds.
On Friday morning we had a fair wind and set off for home at about 10am as the tide started to run in our favour.  We had a lovely sail home arriving back at the Ferry by 3pm.  Not a great deal of bird life to see en route apart from the usual terns and Kittiwakes by the power station.  It was interesting to see a number of butterflies which appeared to be coming in off the sea, mostly large whites but the occasional red admiral, and also a number of bumble bees.

Posted by Marilyn Abdulla at 10:37 No comments:

I will be taking part in this survey over the next couple of weeks - if we get some more nice sunny days!

You just need to record what you see for 15 minutes, and then go on-line to send in your records. Simples!
Posted by Marilyn Abdulla at 03:15 No comments:

In Search of Dragons

Every year I promise myself that I will spend some time learning to ID more dragonflies and every year the time slips by.  However, yesterday I joined a Norfolk Wildlife Trust workshop, led by Pam Taylor from the British Dragonfly Society, which included a visit to NW Roydon Common.
I think we ended up with a total of 12 species, including Black Darter, lots of Emporers, some Large Red Damselflies and (new for me) Emerald Damselfly.  It was a superb day, lots of sunshine, very pleasant company and an expert leader.  I'm afraid my photography skills were sorely tested, but I did manage to get a Four Spotted Chaser before it flew off.
I also saw a Musk Beetle, one of the biggest beetles I've ever seen and a gorgeous metallic green.  The prize spot must however go to Sam, the youngest member of the group, who spotted the adder ﻿in the gorse bush!
It was at least three feet up, maybe it was just too hot at ground level.

A great day out and it was free!  NWT have been granted funding by the Lottery to put on a range of workshops over the next couple of years.  For more info go to http://www.norfolkwildlifetrust.org.uk/