Last weekend I had a good excuse for a night out in my camper.  I had arranged to go on a fungus foray on Hollesley Common on the Sunday morning, so with the forecast predicting a calm and mild night I decided I would have a good walk on Saturday afternoon, and camp out Saturday night near to the start of the walk in the morning.

I set out after lunch on Saturday heading in the general direction of Woodbridge, then had the good idea of a walk at Martlesham Creek.  You can do a nice circular walk from the car park near Martlesham church, to the river wall, then back via the boatyard and through the woods.


It was a lovely afternoon, the sun came out, and I saw a good variety of birds including curlews, little egrets, a flock of around 30 lapwings, and lots of little grebes.  I saw a colour-ringed black-tailed godwit which I reported to the ringing scheme after I returned home, it will be interesting to find out where it has come from.

Returning to the car park there were some nice big chestnuts, just waiting to be picked up.  They made a nice snack for later.

After driving around Hollesley Common for a while I found the car park where we were meeting the next day, and decided it would make a good overnight wild camping spot.  I was able to tuck the van behind some trees away from the road, so it was not too visible to passers by, and far enough from the road to be fairly quiet.


I had a cosy, peaceful night except for some noisy owls, and after breakfast had a little stroll in the forest while I was waiting for the rest of the group to arrive.

We had a very interesting walk, with a very knowledgable guide, and saw a good number of fungi considering that the weather had been very warm and dry.  We found a hornet's nest and a nest of wild honey bees.  There were at least 2 woodlarks singing, confused by the warm weather I think, and we saw where the fallow deer had their rutting ground.  I was invited to see some moths trapped the previous night, which was great - I am thinking of getting a moth trap possibly next year, so it was good to see this one which was home-made and very productive.

I drove on to Butley RSPB car park, where I had lunch, and another walk along the river wall to the ferry slipway.  More curlew, godwits, lapwings etc.  This is usually a good place to see a kingfisher but I was not lucky this time.

Have camper, will travel

I have always wanted a campervan - the freedom of the open road and all that!  Well now I have one.  OK it's 20 years old, but I love it.  I intend to use it for wildlife and photography trips, even maybe a bit of twitching... 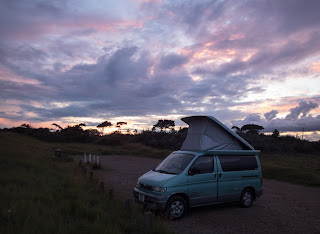 Here it is at East Lane, Bawdsey on my inaugural trial run a couple of weeks ago - I didn't want to go too far from home just in case!  I had a peaceful night except for a few fishermen coming and going from the carpark, and woke up to the fantastic sight of hundreds of swallows and house martins gathering to leave on migration.

After a walk along the seawall, I moved on to Hollesley RSPB reserve and then to Boyton marsh.  I had a lovely day out and the van was just what I hoped it would be, comfortable to sleep in, and a great base during the day.  Where to next?
Posted by Marilyn Abdulla at 12:59 No comments: